Creating 8D problem solving report for internal or external quality problems, it is worth remembering a few basic principles, that will make it fully include all aspects of the problem that occurs, which will allow implementation of effective actions by the organization:

The two most common ones are:

1. Lack of consideration in the risk analysis service parts delivered to the distribution center services:

During development of the risk analysis, it should be remembered that in addition to the production parts that the organization sends to OEM’s car assembly plants, there are often produced service parts, which are sent to the service distribution centers. On this occasion, please note that according to the new IATF terminology, the service part is the part that is approved by the vehicle manufacturer (OEM) as opposed to the spare part that does not have such an approval. In addition, some of the clients (including FCA and FORD) have the appropriate classification for quality complaints relating to such parts. 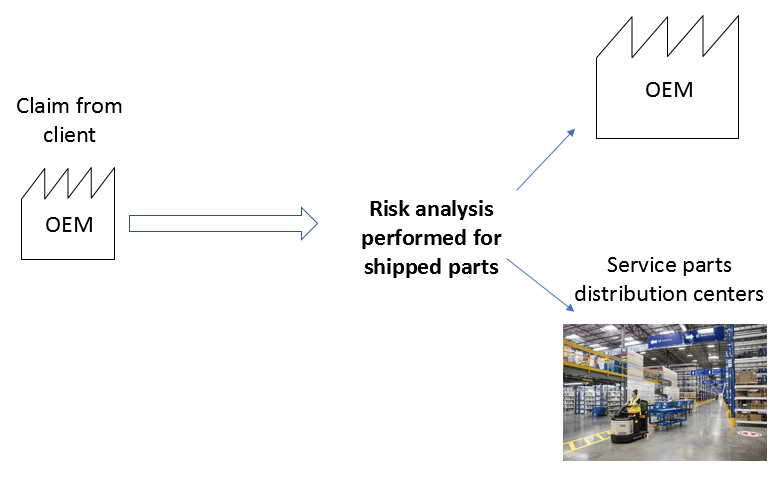 For this reason, whenever risk analysis is being developed in relation to the parts that are sent to the OEM, we must answer the question whether parts with such a quality problem have not been sent to service distribution centers and whether ICA (Interim Corrective Actions) activities,  defined in step D3, should not be extended for these areas. As example it can be related to: sorting, material removal etc.

2. Actions defining based on problem symptom:

This approach most often occurs when, after using one of the root cause analysis methodologies, in this case 5xWhy, the team responsible for issue solving not ask enough questions that could lead to the root cause. This approach usually causes that the problem is not finally solved and after some time the organization may be informed again by the client about its occurrence.

This is a very critical scenario, because it can cause further escalation of the final customer, which will involve, for example, the verification of the production process by a customer representative (SQE, STA) or the introduction of 100% control for manufactured parts through activities related to CSL-1 / 2 (Control Shipment Level).

The only situation when the organization may consider introducing actions based on symptoms concerns a quality problem related to safety (Severity 9-10 according to FMEA) or a problem related to a large amount of sent parts. In such case, actions are taken based on the Emergency Response Actions defined in step D0 – Problem definition.

3. Lack of traceability on subcomponents

In such case for sure it will be to late if issue related to traceability will be considered during 8D problem solving. This kind of approach should be investigated in first phase of APQP related to project planning. The key factor which should be taken for defining proper traceability will refers to risk of nonconforming related to subcomponents and their influence on final product (severity).